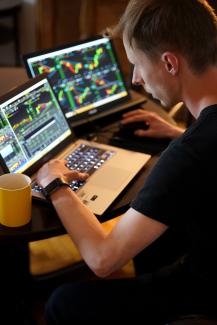 The U.S. equity markets posted solid gains yesterday with the focus on the timing and process of reopening at least some parts of the economy.  The Dow, S&P 500 and NASDAQ rallied 559 points, or .239%; 84 points, or 3.06%; and 323 points, or 3.95%, respectively.  The Trump administration will be coordinating with each of the 50 governors to decide when they would reopening their respective states.

The good news of reopening the economy gave way this morning, focusing instead on new economic reports showing just how much the coronavirus has affected the U.S. economy.  In particular, March Retail Sales was expected to decline 8%, but posted a drop of 8.7% - with more reports to come.  Goldman Sachs also issued some pretty grim forecasts for several measures of the economy, including unemployment, GDP and corporate earnings.

There are two aspects of the current economic decline – the depth and duration.  With as many as 17 million Americans filing for unemployment benefits, it should be reasonable to expect that the economy has and will slow dramatically.  This speaks to the depth of the decline.  And as much as we hate to use the R word – recession – it’s highly probable that the U.S. economy will slip into an event-driven economy.

The duration, or how long the recession lasts, may be a more important issue.  Getting the economy reopened and American industry up and running again will have everything to do with how fast the economy gets back on its feet.  This, of course, balances medical prudence with economic reality – no easy task.  Again, each of the states’ governors will be determining when and how their states get back to work.

For California, Gov. Newsome announced yesterday that there is no exact “reopen date” identified, and that mass public gatherings are likely banned through the summer.