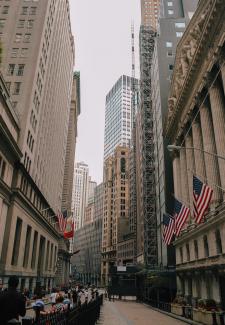 The U.S. equity markets remained in rally mode yesterday on the continued positive outlook for the successful use of Gilead Science’s anti-viral drug, Remdesivir.  Gilead reports to their drug “blocks the virus,” and initial tests indicate a shorter infection period.  Also fueling the market is the number of states already beginning to reopen their economies.

By the end of trading, the Dow gained 532 points, or 2.21%; the S&P 500 gained 76 points, of 2.66%, and the NASDAQ gained 306 points, or 3.57%.  As of 6am PDT today, Dow futures are down by about 250 points on the release of new jobless claims last week.  The Department of Labor reported that 3.84 million Americans filed for unemployment, bringing the total of unemployment claims to more than 30 million over the last six weeks.  On this news, Dow is likely to open more than 200 points.  As we have recognized many times, it is often the last hour of trading that sees the most volatility (up and down).

The battle continues over the reopening of state’s economies, some seeking to ease lockdown measures this week, while others – California our primary concern – are looking to remain in shelter in place for much, or all of, May.  There are a growing number of calls from certain physician groups, economists and mathematicians stating that the estimates being used to justify SIP to help “flatten the curve” have grossly overstated the curve.

We will have some great news tomorrow about the performance of the U.S. equity markets for the month of April – suffice to say, it’s been exactly what the investor had been hoping for!