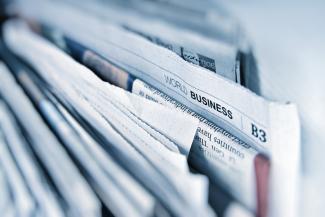 Yesterday started off well for the Dow’s most economically sensitive stocks but turned negative on the release of a surprisingly low consumer confidence report.  With analysts looking for a reading of 93, the report announced the Confidence Board’s number of 84.8, its lowest level in six years.  But as the Dow declined, the NASDAQ gained.  On the day, the Dow dropped 60.02 points, or -0.21%.  The S&P 500 and NASDAQ bucked the Dow’s negative trend, gaining 12.34 and 86.75 points, or +0.36% and +0.76%, respectively.

Stocks climbed back into record high territory again this morning as investors received positive news on the U.S. economy.  Durable goods, a leading economic indicator, jumped 11.2% in July while analysts surveyed forecasted an increase of only 4.3%.  What’s more, durable goods ex-transportation (its major component) rose 2.4%, also ahead of expectations.

Carlos Diez, founder and CEO of MarketGrader, told MarketWatch, “We have one of the biggest tailwinds in history which is the massive, massive monetary stimulus globally.  It’s hard to argue against risk assets when there’s so much liquidity sloshing around.  Over the six to nine months I don’t expect a major downturn.”