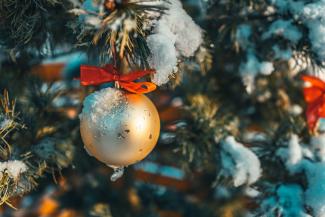 This month we would like to share an article written by Commonwealth Financial Network’s chief investment officer, Brad McMillan, CFA, CAIA, MAI, which captures the mirid of economic and medical issues facing the investment markets at the end of 2021.  In January we will present an in-depth outlook for the U.S. economy, stock, and bond markets for 2022.

November was a solid month for the economy but difficult in terms of both the medical news and financial markets. After a strong October, the Fed announced plans to start tightening monetary policy. Then we heard about a new variant of COVID-19. By month-end, the combined news pulled the markets down from midmonth gains to much more mixed results.

Market data mixed. Here in the U.S., the Nasdaq showed a small gain in November, but the S&P was down slightly, and the Dow lost more than 3 percent. Fixed income assets were mixed. Spreads rose and international markets showed larger drops, with both developed and emerging markets down between 4 percent and 5 percent. The obvious question is what drove this performance—and what does it mean for December?

Medical risks theoretical. Looking first at the positive news, November brought signs that the winter Delta wave may have been slowing. Data showed that both case growth and positive testing rates in the U.S. remained modest by recent standards. The announcement of the Omicron variant raised worries of more case growth in December, but that risk has yet to play out. So, despite the headlines and fears surrounding the new coronavirus variant, we know very little about it. For now, the risks remain largely theoretical. Given that, we certainly need to keep an eye on the medical risks—they are real. But they’re not something to worry about excessively just yet.

Economic data strong. What if we do see an Omicron wave? Having weathered two Delta waves, the economy has become more resilient, so any economic damage would likely be constrained. For example, the economic data kept getting better in November. Hiring for October was healthy, and the employment report included a substantial upward revision to the September numbers. As a result, job growth remained strong, and layoffs dropped back to pre-pandemic levels.

Consumer spending also kept growing in November, despite the Delta wave. Similarly, while rising inflation and policy risks remain a concern, last month’s data showed signs those dangers may have peaked. Looking forward to December, the news is also good. The ADP jobs report came in strong, and the current spending data continued to improve. So, while economic risks remain, they appear to be trending down rather than up.

Markets show stability. After a pullback on fears around the new Omicron variant and interest rate increases, the markets started off December with stability. Although risks remain, continued hiring and spending should support growth in expected earnings. In fact, higher rates have usually been associated with strong market performance. Still, the possibility of more market volatility is real. Based on economic fundamentals, however, December could see the markets holding close to all-time highs, despite the small pullback.

Potential medical risks. Looking at the big picture for December, the real risks are not economic, but medical (possibly) and policy and politics (certainly). The medical risks that come from the Omicron variant may be much worse than we can now see. Even so, we know that medical risks can be contained. We will have to wait and see what happens.

Political and policy risks. The more certain risks are politics and policy, starting with the confrontation over the debt ceiling. This scenario will play out in December, with a real possibility of another government shutdown. We have seen this movie before, but it’s likely some sort of resolution will be found before a shutdown becomes necessary. Nonetheless, the uncertainty created by the situation has the potential to negatively affect the markets and the pace of the economic recovery in December.

In terms of monetary policy, the Fed’s decision to start tightening its programs will also start to factor in. The policy changes will play out over months, but they are becoming a headwind now, in December. The plan for policy tightening is a good sign, in that it means the Fed sees the economy as healthy. Still, the potential for faster tightening—or even commentary on this topic by Fed members during December—could cause further market volatility by the end of the year.

To sum up, the medical progress we made in past months, including November, may be at risk. So far, though, we don’t see signs of the medical improvements reversing in December. The economic progress we have seen is likely to continue. Risks remain for the markets, but December also looks likely to be positive on this front. The real risks come from outside the economy in the form of policy. Although the uncertainty here could be material this month, the fundamentals remain solid so far.

November was a mixed month in many ways. In December, we have the prospect for some more mixed news, largely based on political risks. But, based on what we know now, the medical and economic news is more likely to be positive than negative. The current environment should cushion any impact from the political risks.