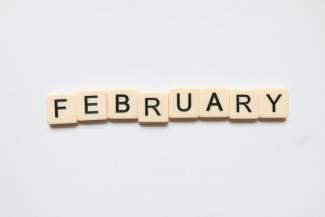 Markets took a bit of a break to start the year, as volatility pulled back earlier gains. The S&P 500 ended the month down 1.01 percent, and the Dow Jones Industrial Average dropped 1.95 percent. The Nasdaq Composite did better, finishing the month with a 1.44 percent gain.

These weak results came despite improving fundamentals. According to Bloomberg Intelligence, as of January 29 with 37 percent of companies having reported, blended earnings for the S&P 500 in the fourth quarter are down 1 percent. This is much better than the 8.8 percent decline analysts expected at the start of earnings season.

The story was much the same for international markets. The MSCI EAFE Index was also hit by volatility, ending January down 1.07 percent. Emerging markets held up better, with the MSCI Emerging Markets Index gaining 3.09 percent. Both indices finished above the 200-day trend line for the third month in a row.

Third wave of pandemic may have crested

The major pandemic metrics all improved significantly in January, signaling that the third wave may have peaked. The number of new cases per day now sits at levels last seen in November. There were similar declines in the number of hospitalized patients and the positive test rate toward month-end.

One reason for the improvement is the progress made with vaccinations. By the end of January, nearly 10 percent of the U.S. population had received at least a single dose of a vaccine.

The major risk at this point is an uptick in infections caused by a more transmissible strain of the virus seen in several countries. At the moment, however, there are no signs of this, and the trends remain positive.

Economic damage also may have peaked

The year started with the economic damage from the third wave mounting. Jobs—along with consumer confidence and spending—dropped at year-end, while layoffs rose again. In January, however, there were signs that the worst of the damage may be behind us.

Consumer confidence and spending figures held up much better than they did last April, indicating that consumers are expecting things to improve. Federal stimulus payments are hitting bank accounts, which should help workers survive until their jobs return. We are now seeing consumer confidence stabilize and even start to recover, which has boosted spending data.

Business confidence and investment saw a surge in the fourth quarter. This is shown by the Institute for Supply Management (ISM) Composite index, which ended 2020 at a two-year high. As you can see in Figure 1, this gauge of business confidence has rebounded notably since hitting an 11-year low in April of last year.

Risks remain even as things get better

There are certainly reasons to have hope looking forward, but there are also very real risks. We’ve made progress in controlling the pandemic, but the possibility of a more contagious variant of the virus is a concern. The economic risks are largely political in nature and center around the availability of stimulus.

Given the uncertainty, a well-diversified portfolio that matches investor goals and timelines remains the best path forward for most. If concerns remain, contact our office.

Disclosure: Certain sections of this commentary contain forward-looking statements based on our reasonable expectations, estimates, projections, and assumptions. Forward-looking statements are not guarantees of future performance and involve certain risks and uncertainties, which are difficult to predict. Past performance is not indicative of future results. Diversification does not assure a profit or protect against loss in declining markets. All indices are unmanaged and investors cannot invest directly into an index. The Dow Jones Industrial Average is a price-weighted average of 30 actively traded blue-chip stocks. The S&P 500 Index is a broad-based measurement of changes in stock market conditions based on the average performance of 500 widely held common stocks. The Nasdaq Composite Index measures the performance of all issues listed in the Nasdaq Stock Market, except for rights, warrants, units, and convertible debentures. The MSCI EAFE Index is a float-adjusted market capitalization index designed to measure developed market equity performance, excluding the U.S. and Canada. The MSCI Emerging Markets Index is a market capitalization-weighted index composed of companies representative of the market structure of 26 emerging market countries in Europe, Latin America, and the Pacific Basin. It excludes closed markets and those shares in otherwise free markets that are not purchasable by foreigners. The Bloomberg Barclays Aggregate Bond Index is an unmanaged market value-weighted index representing securities that are SEC-registered, taxable, and dollar-denominated. It covers the U.S. investment-grade fixed-rate bond market, with index components for a combination of the Bloomberg Barclays government and corporate securities, mortgage-backed pass-through securities, and asset-backed securities. The Bloomberg Barclays U.S. Corporate High Yield Index covers the USD-denominated, non-investment-grade, fixed-rate, taxable corporate bond market. Securities are classified as high-yield if the middle rating of Moody’s, Fitch, and S&P is Ba1/BB+/BB+ or below.