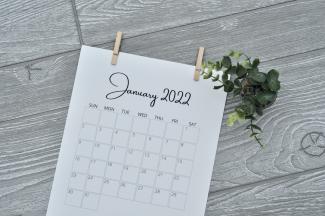 If nothing else, the U.S. equity markets proved to be resilient in the face of a myriad of economic challenges last year, namely rising inflation, supply chain bottlenecks and labor shortages.  Gross domestic product (GDP), which averaged a solid 6.5% in the first half of the year, fell off dramatically to an annual pace of only 2.1% in the 3rd quarter as the economic challenges increased.  Note that the GDP figure for the 4th quarter was not yet released as of the writing of this article.

The consumer price index (CPI) for December declined from the month of November (0.8% to 0.5%), but increased year-over-year from 6.8% to 7% - the highest rate of inflation since 1982.  And while the average hourly wage increased by 4.8%, resurgent inflation caused a decline in real wage by 2.2%.

The Federal Reserve began changing its monetary policy late in 2021, signaling it would begin to reduce (or taper) the amount of bonds it would be purchasing in the open market – known as Federal Open Market Operations.  This was done to reduce the amount of money supply in the economy and thereby help reduce the growth in inflation.  The Fed also announced it is planning to increase interest rates three to four times in 2022.

Monetary and fiscal policy will play a key role in determining the trajectory of the U.S. economy in 2022, specifically regarding inflation and interest rates.  This will, in turn, have a direct impact on the investment markets.  As the markets showed incredible resilience in 2021, we believe the markets are likely to be quite volatile in 2022 which we have already begun to see.

Our outlook for 2022 will cover four key areas – the U.S. economy, inflation, stocks and bonds.

As the U.S. economy moves toward mid-cycle (characterized by a strong economy but with moderating growth), our 2022 forecast is for a gross domestic product of 4.0 – 4.5%.  Although this is significantly lower than the first half of 2021, it still represents an expanding economy.  While monetary, fiscal COVID-recovery policies played key roles in the economic recovery of 2021, the economy should begin to grow firmly on its own with consumers, productivity, small businesses and capital investments all playing a part in the next stage of economic growth.

Inflation may prove itself “sticky” this year and only begin to decline in the second half of the year before settling back into the 2.0 – 2.5% range by year’s end.  The actions taken by the Federal Reserve will largely determine the “glide path” inflation takes as it decreases throughout the year.

With a return to a more “normal” economy, we expect solid economic and corporate earnings growth in 2022 that could help deliver another good year for stocks.  A double-digit percentage increase in S&P 500 earnings per share (EPS) is possible, but COVID-related constraints could lead to higher costs and weaken profit margins.  We favor U.S. over developed international stocks, value overgrowth, and cyclical (restaurants, airlines, high-end clothing and auto manufacturers) sectors over defensive (utilities, consumer staples and health care) sectors.

As interest rates and inflation are likely to moderately increase in the near-term, returns from bonds are likely to be flat to low single digit in 2022.  Our focus will be on the yield on the 10-year Treasury, currently running in the range of 1.7 – 1.8%, and possibly increase to 2% by year’s end.

The year begins with some challenging reports on December inflation (the highest in 40 years) and the University of Michigan’s sentiment report showing the second lowest reading in a decade.  But the U.S. economy is strong and has endured much worse economic conditions.  As such, we are cautiously optimistic for investment performance in 2022.