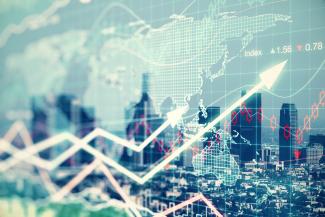 After sharp declines in May, the U.S. equity markets posted a strong recovery in June as all three major stock markets posted positive returns. The S&P 500 gained 7.05% for the month, the Dow Jones Industrial Average returned 7.31% and the NASDAQ Composite rose 7.51%. Further, June’s gains offset May’s declines, leading to positive quarterly gains of 4.30% for the S&P 500, 3.21 for the Dow and 3.87% for the NASDAQ.

This volatility, however, has investors asking the inevitable question – “Is this the end of the economic recovery and stock market rally?” As we see it now, the answer is “not yet.” The big picture suggests growth is likely to continue, albeit at a slower rate, for the rest of the year which should, in turn, support the financial markets.

Even fixed income (bonds) had a positive June, driven primarily by falling interest rates. The Bloomberg Barclays U.S. Aggregate Bond Index returned 1.26% for the month, and 3.08% for the second quarter of 2019. U.S. bonds have enjoyed a strong run as a softer outlook for growth and subdued inflation (see below) has kept hopes alive for lower interest rates in the future. At its June meeting, the Federal Reserve (Fed) left rates unchanged but sent a powerful message that it stands ready to cut rates to fight economic headwinds should they occur.

The battle being played out here is between the headlines in the news vs. the economic fundamentals. In the news is the Mueller report and Congressional investigations, a trade deal with China, tariffs and looming tensions with Iran. Reacting to all these headlines would have been a bad strategy because while the markets have been volatile again this year, the fundamentals – the underpinnings of the economy – have remained solid.

Take job growth, for example. Although there has been volatility in the monthly job gains, the overall growth rate has remained steady at more than 2 million jobs per year. Over the past 40 years, when job growth has been at this level, a recession has been at least a year away. Yes, we have seen some weakening recently, but the year-over-year trend remains strong. Similarly, consumer confidence levels remain high, at levels last seen in 2001 and the year-over-year change remains positive. We have never had a recession without a decline in consumer confidence of at least 20 points over the previous year. This, theoretically, should mean any conversation about recession is at least a year away.

The yield curve has also been in the news in recent months – a graph that plots the yield on Treasury securities from one month to 30 years. In normal market conditions, the curve is positively sloped with the short-term Treasuries providing the lowest yields and increasing as maturities increase. A flat or inverted yield curve has preceded the last 7 recessions by an average of 27 months. Technical inversion occurs when the yield on the 2-year Treasury exceeds the yield on the 10-year Treasury. While the current yield curve has been close to inversion, it has not yet happened, suggesting again the markets have a green light for the balance of 2019.

Given the healthy economic data mentioned above, one could reasonably expect to see a rise in inflation. But for all practical purposes, inflation has been at or very near the Federal Reserve’s target of 2%. This figures into the Fed’s decision about the direction of interest rates – expectations are for no more increases this year, plus the possibility of rate cuts. Until the June employment report, conventional wisdom held that the Fed was going to cut rates during their July 30/31 meeting. But given the strength of the June report, adding 224,000 jobs in the month when the Labor Department was expecting 165,000, hopes for that rate cut are somewhat in question.

Barring any unforeseen events, the two issues we see potentially affecting the investment markets are the direction of interest rates – the Fed – and the likelihood of a trade deal with China. The best case scenario is that the Fed cuts interest rates by 25 basis points (1/4%) at their July meeting, and that the Trump administration reaches a meaningful trade deal with China. Should this happen, we would expect global stock markets to respond very favorably. But time will tell and, as always, nothing is ever guaranteed.