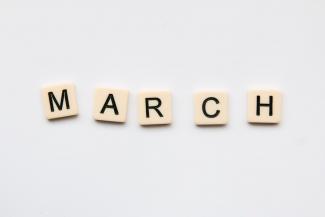 February looks to have been the start of our recovery from the pandemic. The medical news improved markedly, and the vaccination deployment finally got traction. Consumer confidence and spending turned around, and business investment continued to improve. Markets moved up. It was a good month all around. While some areas of concern became apparent at month-end, the progress was real—and significant.

Medical numbers. You can see that progress in the numbers. Both case growth and hospitalizations were down by more than half during February. Positive test rates dropped back, suggesting the decline was real. Despite weather-related delays for part of the month, vaccinations more than doubled—with 15 percent of the population having received at least one shot.

Economic news. The economic news also got better in February. Checks from the federal stimulus program started to land in bank accounts, sparking a recovery in both consumer confidence and spending. As the medical news improved, states reopened, allowing companies to hire again. Business confidence and investment went from strength to strength during the month. Even the governmental part of the economy looked better, as states found their budgets took much less damage than expected. Just as with the medical news, there is a lot of ground to make up. Nonetheless, particularly in employment, there were notable improvements.

A turning point. Going forward, the vaccine deployment will accelerate. Many of the supply chain problems have been worked out, and availability should increase substantially in March. In addition, the approval of the Johnson & Johnson vaccine, which is simpler to store and administer than the other vaccines, should help accelerate the deployment process. March looks likely to be the turning point for vaccinations, as February was for case growth.

Pandemic not done. Although there’s been some very real good news, we are not done with the pandemic. Despite the declines, both new cases and hospitalizations remain far too high, near the peaks of the second wave. In fact, at the end of February, the improvement had slowed and even showed some signs of reversing. The risks are real. Nonetheless, the accelerating vaccination process should help keep those risks in check. The most likely outlook for March remains continued progress on the pandemic.

A virtuous cycle. In March, the economic prospects are good. As states reopen, the job market will continue to get better, especially in the hardest-hit sectors like restaurants and entertainment. In a virtuous cycle, this improvement will help spur confidence and spending. As for the prospect of more federal stimulus, if it arrives, the payments will act as another tailwind. Just as with the medical news, while risks remain—and unemployment is still very high—the most likely course is continued improvement.

Market rally mode. This scenario is the recovery the markets have been seeing for the past several months. Now, it is playing out—particularly in corporate earnings. So far, earnings for the past quarter are up by almost 6 percent, against an expected decline of almost 9 percent. Companies have adapted and are reaping the benefits as the economy improves. Stronger business prospects should provide continued support to the markets through March, and even move them higher. Despite the economic damage, the medical risks, and all the turbulence with the market itself, the market has stayed in rally mode.

Risk of economic success. Looking forward, the biggest risk from a market perspective is that of economic success. We saw that risk toward the end of February, when the prospect of faster growth and inflation pushed interest rates up, shaking the markets for a couple of days. Markets have largely priced in the good parts of a growing economy. But they have yet to fully reckon with the potential downsides—such as higher inflation and interest rates. The recent bout of volatility may well be repeated as the recovery gets more firmly into gear in March.

Getting Closer to Normal?

And that is the story looking back and ahead. Looking back, February was a month when we finally turned the corner on the third wave—and quite possibly the pandemic itself. The economy started to reopen and really heal, and the market started to move away from being driven by the pandemic and the stimulus response and began, instead, to look at the real economy again. In short, February was the month when something like normal started to look like a reasonable, near-term possibility.

We will see. Real risks remain—the possibility of another wave of infections is very real, driven by reopenings and more contagious variants of the virus. The economic damage may take a long time to heal. Still, between the rapidly expanding vaccination deployment and the substantial federal stimulus programs, the prospects for March are much better than we have seen so far.

In other words, while we still need to be cautious, a good February will likely transition to a much better March. While there will likely be storms in the next couple of months, it now seems like spring is on its way.