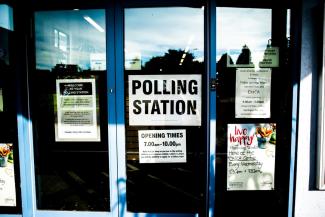 Pre-election volatility had been expected, and that’s investors got last week.  The Dow dropped 4.6% last week making for its worst monthly loss since March.  The S&P 500 and the NASDAQ declined 2.8% and 2.3%, respectively, both suffering their second straight negative months.  The U.S. equity markets are coming off their worst week since March 20 as COVID cases surged, fiscal stimulus negotiations failed (for now) and the big cap technology stocks plunged following their quarterly earnings report.

Sone market analysts believe last week’s sell-off leading up to the election gives the market less downside risk to a contested election.  “Even though we’re worried that there could still be one more wave down if we get another big wave of uncertainty, we think the stock market is now setting up nicely for a nice net advance over the next two months or so,” Matt Maley, chief market strategist at Miller Tabak, said in a note on Sunday.

Stock futures are rebounding this morning with all three major averages pointing to a strong opening.  European stocks also are showing strong gains, especially in Great Britain, France and Germany.  Asian markets posted similar strength for this the first trading day of the week.

We expect this to be a pivotal week in the markets with the possibility of a contested election looming over the markets.  The “hanging chad” incident in Florida during the 2000 election saw the S&P 500 drop 8% before a conclusion was reached.