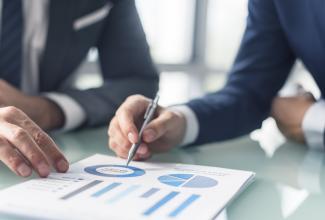 September posted strong equity (stock) returns and ended an otherwise volatile quarter in the investment markets. In fact, September’s returns helped most equity markets turn their performance into the positive for the quarter, with the exception of U.S. small cap and global (excluding the U.S. and Canada) stocks.

Developed international stocks (EAFE) posted a solid return in September, yet still finished the quarter in the red due to losses earlier in July and August. The same applied to foreign emerging markets, gaining 1.94% in September, yet posting a decline of 4.11% for the 3 rd quarter. Weighing on foreign stock investors is rising political concerns and slowing economic growth.

Fixed income (bonds) also had a rough month, despite the Federal Reserve moving to cut interest rates (as expected) by 0.25% at their September meeting. Rapid fluctuations in the yield on the 10-year Treasury bond during the month weighed on the bond market, causing the Barclays U.S. Aggregate Bond Index to decline by 0.53%.

The U.S./China trade talks continue to drive much of the day-to-day movements in the equity markets. What used to be called a “headline-driven” market, is now more directly and instantaneously a “tweet-driven” market. While the timing of a permanent solution is unknown, talks are set to resume later this month.

October is historically a volatile month for equity markets, and there is much on the horizon to cause potential volatility. In addition to the U.S./China trade talks, Brexit (or lack thereof) is likely a source of future volatility, especially in the developed international stock markets. Now enter the impeachment inquiry. The potential effects on the investment markets are difficult, at best, to predict. We believe this political unrest may weigh on consumer and business confidence and spending, and most recently consumer spending has been a very strong component of the U.S. GDP.

There are no doubt risks looking forward as the investment markets do not like uncertainty. We do believe, however, that the overall strength of the U.S. economy will help cushion any short-term downdraft in the investment markets. Volatility is part of the reality of investing, and with volatility can come opportunity. We always advise these two things – do not make short-term investment decisions on short-term market performance, and a well-diversified investment portfolio is the best way to move forward in an uncertain world.