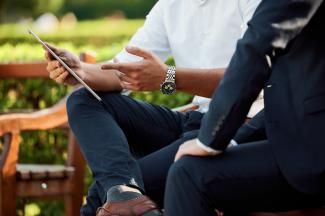 In the 45 minutes prior to the announcement of the jobs report this morning, all three major stock indices were negative.  Upon the announcement that 884,000 Americans had filed for unemployment benefits, index futures turned positive although analysts had expected only 850,000 unemployment claims.  Although this total is well below the record 6.9 million who filed in March, it remains stubbornly close to the 1 million mark.

In a very choppy trading session today, the technology sector continues to outpace the Dow and S&P 500, at least in early trading.

Market volatility, measured by the VIX index, has become a concern for some technical analysts.  Specifically, the relationship between the VIX and the S&P 500.  Normally, the VIX will decline when the S&P advanced, and vice versa.  In recent days, however, the VIX has increased when the S&P has increased, a pattern analysts say has not occurred since just before the tech bubble burst in early 2000.

We are paying very close attention to this market and the myriad of factors what may affect its direction.