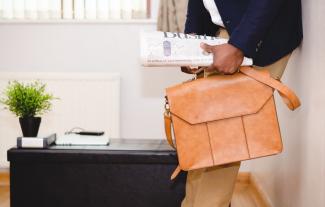 The U.S. stock market is coming off its longest weekly losing streak since 2019, with the Dow, S&P 500 and NASDAQ falling for their third straight week.  On Friday, the Dow dropped 244.58 points, or -0.88%, while the S&P 500 and the NASDAQ lost 37.54 and 117.02 points, or -1.12% and -1.07%, respectively.  Technology stocks led the markets down, with Facebook, Amazon, Apple, Netflix Alphabet and Microsoft all posting steep weekly losses as the S&P 50 tech sector lost 1% for the week.  The NASDAQ enters this week in correction territory, being down more than 10% from it record high reached on September 2.

Negotiations for a much needed second stimulus bill could have become more complicated after the passing of Supreme Court Justice Ruth Bader Ginsberg last Friday, which is likely to lead to a bitter nomination battle in advance of the election.  President Trump said he would name a nominee this week to fill the open seat on the Supreme Court.  Chris Krueger, a Washington strategist at Cowen, said that a new coronavirus bill is now “unlikely until post-November 3 as the fight over Justice Ginsburg’s empty seat will consume D.C.”

Market futures are sharply lower this morning as the path forward for stocks seems increasing unclear.  “For the market to hold these levels buyers have to come into the technology sector over the next week to 10 days,” said Mark Chaikin, CEO of Chaikin Analytics.  “Without the impetus of the call option buyers who helped propel the large-cap tech stocks to extreme valuations, it is unlikely that the subsequent rally can exceed the September peak.”

We are watching for market volatility to increase over the coming weeks as the list of challenges facing the markets continues to grow.  The inevitable question of whether to just hang on through the volatility or take some money “off the table” and seek a buying opportunity after the election arises.  It comes down to risk tolerance and time horizon.  In any event, it may be time for us to have that conversation.