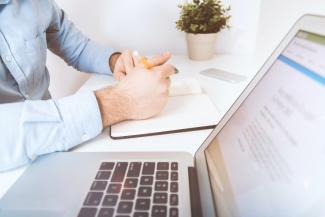 In a holiday-shortened week of trading last week, the S&P 500 and NASDAQ dropped 0.7% and 1.6%, respectively, while the Dow managed to eke out a 0.1% gain, supported by names like Caterpillar and JPMorgan.  Some Wall Street investors became concerned about the rapidly rising bond yields in recent weeks as they could especially hurt high-growth companies reliant on easy borrowing while diminishing the relative appeal of stocks.

“This move in yields should be something that investors keep a close eye on,” said Matt Maley, chief market strategist at Miller Tabak.  “Just because long-term rates are ultra-low on an historical basis, we do not believe that they will rise as far as most pundits think they do…before they impact the stock market.”

All eyes will be on Federal Reserve Chairman Jerome Powell, who delivers his semi-annual testimony on the economy before the Senate Banking Committee on Tuesday, February 23.  His comments on interest rates and inflation could determine the direction of the market for the week.

“We do not see the recent increase in yields as a threat to the bull market,” said Keith Lernerm chief market strategist at Truist.  “Given that we are in the early stages of an economic recovery, monetary and fiscal policy remains supportive, the sharp rebound in earnings, and the favorable relative valuations, we maintain our overweight to equities.”