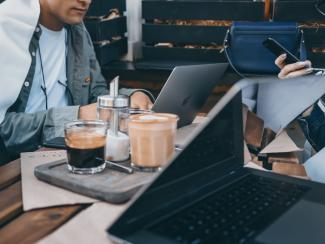 Last week, shortened by the President’s Day holiday, saw the U.S. equity markets take some very wild swings.  As the Russian invasion of Ukraine began last Tuesday and Wednesday, global investment markets sank to new lows for 2022, as gold surged.  The week, however, ended with solid rallies Thursday and Friday on hopes of peace talks between Russia and Ukraine, though such hopes appear dimmer after last weekend.  On Friday alone, the Dow Jones Industrial Average gained 834.92 points, or 2.5%, for its best daily gain since early November 2020.  The S&P 500 gained 95.95 points, or 2.2%, while the NASDAQ added 221.04 points, or 1.6%.  The Thursday-Friday rally was not enough to push the Dow out of the red, dipping 0.1% for the week.  The S&P 500 and NASDAQ did post small gains of 0.8% and 1.1%, respectively.

“The ambiguity regarding the situation in the Ukraine will continue to challenge risk assets for the time being and it is something investors should monitor closely over the coming days and weeks,” Commonwealth Financial Network head of investment management Brian Price said in a research note.  “Now it is just a question of how many rate hikes and whether or not we’ll see 50 basis points during the Fed’s March meeting.”

Investors will shift their attention from Putin to Powell this week when the Federal Reserve Chair testifies before lawmakers Wednesday and Thursday for clues in his remarks on how geopolitical risks could impact the Fed’s path forward on raising interest rates.  Traders will also focus on the Labor Department’s February jobs report due for release Friday for the latest snapshot on the U.S. job market recovery.  February’s figures are likely to show continued momentum in the labor market’s recovery, with economists surveyed by Bloomberg estimating 400,000 jobs added during the month, following January’s surge of 467,000 jobs for the month.

“While it may take more time for the market to shift its focus toward solid company fundamentals and get more comfortable with the inflation outlook, we expect stocks to recover early-year losses and rally back to new highs through year-end, as that transition takes place,” LPL equity strategist Jeff Buchbinder said.