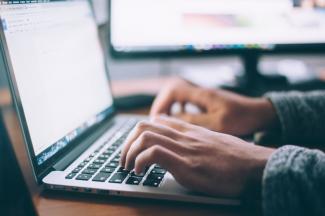 The U.S. equity markets gave back some of the gains of the last two years by having their worst week in almost 2020.  The S&P 500 fell 5.7% for its steepest fall since March 2020, as the Dow dropped 4.6% for its worst week since October 2020.  The sell-off in the tech-heavy NASDAQ continued, dropping 7.6% last week for its fourth straight weekly loss.  The index is sitting more than 14% below its November 2021 record close.

It is believed that the biggest single factor driving bond yields up and stock prices down is the expectation that the Federal Reserve will raise rates multiple times in 2020 in an effort to curb inflation that is running at its highest pace in 40 years.  The Fed is set to hold a two-day policy meeting beginning Tuesday. At its conclusion on Wednesday, Chairman Jerome Powell is expected to signal that interest rates will likely rise as soon as March.

“I think at this point, it’s very clear that the first-rate hike will be at the March meeting.  So, I think as we look at the January meeting – which is likely to produce very little or zero, quite frankly, in policy terms – what investors and what we’re going to be looking at is really just the language around inflation,” Jason Ware, Albion Financial Group Partner, told Yahoo Finance Live last week.  “At the end of the day, inflation is what’s driving Fed policy at least over the medium term.”

Also coming this week will be a number of quarterly earnings reports from big-name companies, including IBM, Microsoft, and Apple.