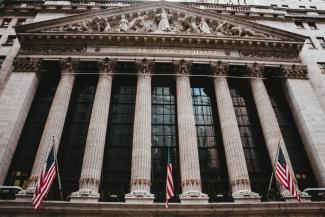 Last week, the U.S. equity markets suffered one of the worst weeks in years sparked by the Federal Reserve (Fed) raising short-term interest rates by 0.75%, the largest single increase since 1994.  The major indices had their 10th losing week in the last 11 on fears that the Fed will hike interest rates even more aggressively in an effort to tame inflation at the risk of causing a recession.  The S&P 500 dropped 5.8% for its biggest weekly loss since March 2020, down more than 23% since its record high last January.  The Dow slid 4.8%, falling below 30,000 for the first time since January 2021.  The tech-heavy NASDAQ also dropped 4.8% last week, declining 33% from its record high.

“The recent drop in equity markets and inflection in investor attitudes make a bottoming thesis more difficult to make,” said Nationwide’s chief of investment research, Mark Hackett.  Market analysts continue to search for the market bottom, the point at which investors reverse the selling that has plagued the markets all year and dive back into the market.  Other market bottoms, such as March 9, 2009, and March 23, 2022, were not identified until weeks after they had passed.  It’s interesting to note the reason for the rapid turnarounds following these market bottoms – none, really.  It appears that the market had dropped enough to offer attractive valuations on stocks sufficient for investors to jump back in.

The 2nd quarter 2022 gross domestic product (GDP) will be announced in early July and will reveal if the U.S. economy has in fact fallen into a recession – defined as two consecutive calendar quarters with negative GDP.

St. Luis Federal Reserve President, James Bullard, believes the economy is in good shape.  “The U.S. economy should continue to grow in the coming several months,” he said.  “On GDP growth, I think that the indicators are that there will be continued expansion in the quarters ahead,” Bullard told students at the Barcelona School of Economics.