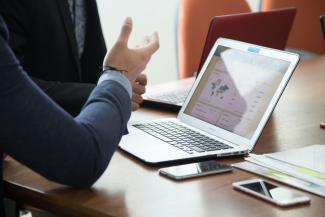 The yield of the 10-year Treasury took center stage last week as the equity and fixed income markets watched its every move.  Hitting a 14-month high last week, the benchmark interest rate seems to be settling in at 1.7% (from a low of 0.55% February 2020).  The Dow and S&P 500 were both down on the week, dropping 0.5% and 0.8%, respectively.  The tech-heavy NASDAQ rose last Friday, but still lost 0.8% for the week.

With the yield on the 10-year Treasury sliding a bit to 1.68% this morning, the NASDAQ futures are up more than 90 points, while Dow futures remain negative and the S&P 500 up slightly.

Jay Powell, Chairman of the Federal Reserve, spoke last Wednesday and addresses the direction of interest rates and inflation.  In a brief statement, the chairman reiterated that the Fed’s intent was to keep interest rates at or near zero, and increased the median inflation estimate from 1.8% to 2.4%.  The Dow and S&P 500 both reached record highs on Wednesday, retreating by week’s end.

Optimism about the markets and the path of the U.S. economy has been growing as vaccines are rolling out across the country, with the pace of Americans getting shots climbing in recent weeks. Several states are seeing an increase in COVID-19 cases, however.  U.S. trial data released Monday showed the COVID vaccine developed by AstraZeneca and the University of Oxford is 79%effective in preventing symptomatic illness and 100% effective against severe disease and hospitalization.