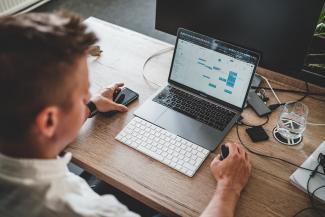 As trading gets underway this week, the potential for rising inflation remains foremost in the minds of investors.  The latest U.S. data show fiscal stimulus helped drive the strongest monthly gains in personal incomes in records going back to 1946, and the Federal Reserve’s preferred gauge of prices rose by the most since 2018.  Though last year’s COVID shock has skewed some data, such readings may fuel speculation that central banks may start to withdraw support of the economy by reducing its monthly asset purchases.

“Interest rates going forward will be led more by expectations on the tampering from the Fed rather than by inflation,” Raffaele Bertoni, head of debt capital markets at Gulf Investment Corp., said on Bloomberg Television over the weekend.

Later this week, Federal Reserve Chair Jerome Powell will speak at an event hosted by the National Community Reinvestment Coalition.  Investors will try to anticipate the steps, if any, the Fed will make to either curb future inflation, or allow it to drift well over 2%.

The old Wall Street saying, “Sell in May and go away,” is certainly not holding true on this the first trading day of May.  Within just a few minutes of the opening of trading, the Dow is up more than 220 points, S&P 500 up more than 19 points and the NASDAQ up more than 20 points.  The Russell 2000, a measure of small capitalization stocks, is solidly up more than 17 points.  Gold, which as been on a run in recent weeks, is up more than $22 per ounce, or a gain of 1.25%.