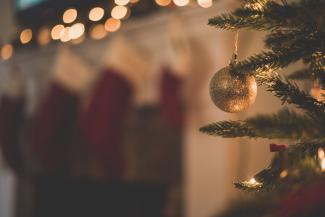 The U.S. equity markets enjoyed a successful November with broad gains seen across all three major indices.  The Dow saw the largest gain of 6.0%, while the S&P 500 and NASDAQ rallied 5.6% and 4.5%, respectively.  Despite these gains, all three indices have posted significant negative performance for the year. Due to 40-year high inflation and rapidly rising interest rates, the Bloomberg U.S. Aggregate Bond Index posted a loss of 3.68% in the month of November and, like the stock market, a significant decline for the year.

Investor anticipation that the Federal Reserve (Fed) will “pivot” and slow the pace of interest rate hikes has largely fueled short bursts of rallies in the stock market, only to be dashed with economic reports that show strength in the U.S. economy that give the Fed sufficient reason to continue on its mission of rapidly hiking rates to combat inflation.  Two cases in point are the gross domestic product (GDP) and the employment market.  After experiencing negative GDP in the first two quarters of 2022 – indicating a technical recession – the U.S. economy posted a 2.9% annual growth rate in the third quarter. While this would normally be seen as great news, investors interpreted the revival in economic growth as giving the Fed, as previously noted, reason to continue to hike rates. Consistent growth in employment is perhaps the single most significant reason for the negative GDP in the first quarters not indicating a recession.

Consumer price index (CPI) reports from the last two months indicate that the Fed’s efforts may well be working.  Headline CPI (which includes all items) in October showed a gain of 0.4% for the month and 7.7% year-over year, beating Dow Jones estimates of 7.9%.  October was the second straight month of a 0.4% increase in inflation. Core CPI, excluding volatile food and energy, rose 0.3% during the month - the same increase seen in September. Experts were widely hoping for a slowing down of interest rate hikes by the Fed at their December meeting. During his November remarks at the Brookings Institute, Federal Reserve Chair Jerome Powell signaled that a possible slowdown in the pace of tightening interest rates could potentially happen during the Fed’s next meeting December 13 – 14.  As of the end of November, the markets are pricing in a 77% chance that the Fed raises rates 50 basis points (0.50%). Thus far in 2022, the Fed has raised rates 6 times, with the last four being a 0.75% increase.

The Bureau of Labor Statistics announced on December 13 that headline CPI had increased only 0.1% for the month and 7.1% year-over-year, beating Dow Jones estimates of 7.3%.  Core CPI also beat industry estimates, posting a monthly gain of 0.2% and 6.0% year-over-year.  The significance of the November CPI report is that it shows a two-month pattern of both headline and core CPI falling together.

As expected, the Fed announced on December 14 that they were raising interest rates by 0.5%, bringing the range of the federal funds rate to 4.25% - 4.5%.  The significance of this is that for the first time since the Fed began raising interest rates March 17 that the rate of increase has slowed.  That said, when Jerome Powell gave his statement after the rate increase was announced, he shook the markets by saying the Fed sees rates increasing another 0.75% in 2023 and a solid market rally that day fizzled. This has been the story for much of the latter half of 2022. Investor hopes of declining interest rates drive the market up, and Fed comments dash both those hopes and the rally.  Rally – retreat, rally – retreat has been the story during the last two quarters.  This is likely to continue to make short-term performance very volatile and rapidly changing.

Many economists believe that shrinking the money supply, specifically M2 (time deposits less than $100,000 and money market accounts) money supply, will have a far more powerful effect on reducing inflation. This belief is supported by sound economic principles. Since M2 peaked in March, through the Fed’s open market operations (selling bonds in the open market), M2 has declined by nearly 1.5%.  In combination with raising interest rates, inflation will sooner or later subside.

The investment markets are certainly going through a process of trying to recover amidst a rapidly changing economic environment. Analysts’ projections for next year vary widely, ranging from a deep recession to staging a solid recovery in the first half of 2023. If (and only if) inflation continues to decline and corporate earnings remain strong, we could see the possibility of a recovery in the U.S. stock market happening next year. We are watching the bond market very closely and feel there is a high likelihood that the bond market may stage a solid recovery next year as well.

Patience is, now more than ever, vital. History is the best indicator about where the markets are headed, and full market recovery occurred even after economic calamities such as the financial crisis of 2008 and 2009, COVID in 2020 and even the Great Depression of 1929 – 1939.

Please contact us anytime if you would like to discuss these issues further or review our investment strategy as we enter 2023.