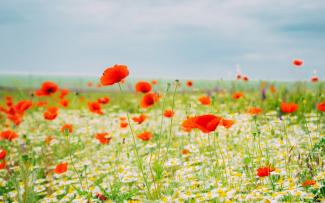 The global investment markets experienced their worst month of 2022 in April with very few asset classes being spared the declines.  Coming off the Federal Reserve’s 0.25% interest rate hike in March, the markets were fearing the worst was yet to come in terms of rising inflation and interest rates – and priced those fears into equity and bond values.  Some economists feel the market’s fear is overblown, but it’s the uncertainty that had the most detrimental effect on investment prices.

For the month of April, the Dow and S&P 500 index dropped 4.82% and 8.72%, respectively, and while rising interest rates battered the technology sector, the NASDAQ declined a whopping 13.24%.  These losses offset the gains we saw in March and came despite improving fundamentals during the month.  According to Bloomberg Intelligence as of April 29, with 55% of companies having reported earnings, the average earnings growth rate for the S&P 500 in the first quarter was 8.7%.  This is up from the 5.2% growth that was expected at the start of earnings season and indicates businesses continue to outperform analysts’ expectations.  We know that over the long run, fundamentals drive market performance which may come as a light at the end of this tunnel.

This was much the same story for international stocks in April.  The MSCI EAFE Index (Europe, Australasia, and the Far East) fell 6.47% while the MSCI Emerging Markets Index slipped 5.55%.

Even the bond market sold off during the month, primarily driven down by rising interest rates.  The Bloomberg U.S. Aggregate Bond Index fell 3.79% while the U.S. Corporate High Yield Index slid 3.56%.  Some bond analysts have referred to this year’s decline in bonds as a “once in a generation” occurrence as rapidly rising inflation, followed by interest rates rising just as fast, sent bond prices down.

Hopes were high for an improved inflation report for April with an expected consumer price index (CPI) of 8.1%.  The CPI was released on May 11 at 8.3% with a core CPI (excluding food and energy prices) at 6.2%.  The news about the CPI was a very mixed message – it was lower than March’s 8.5% reading, but higher than expected.  The real news was in the month-to-month increase in the core CPI.  The March monthly increase in core CPI was 0.3%, while April was reported at 0.6%.  This means that excluding food and energy prices, the inflation in the rest of the economy grew at an even higher rate in April.

All eyes are on the Federal Reserve as they enter a cycle of tightening monetary policy.  With inflation remaining near a 40-year high, the Federal Open Market Committee (FOMC) is expected to raise the Federal Funds Rate at each of its next five meetings scheduled in the balance of 2022 (June, July, September, November and December) or until it reaches its target rate of 2%.  This rate is currently between 0.75% - 1%.  In addition, the FOMC will begin selling bonds in the open market in an effort to reduce the money supply in the economy.  The money supply is at the root of the current battle in Washington between the administration, who wants additional federal spending as a means of propping up the economy, and those who attribute federal spending to the high levels of inflation we now have.  At the end of the day, the money supply must be reduced in order for inflation to decline.

The most likely path forward for the U.S. economy remains continued growth.  The current economic fundamentals remain fairly healthy, driven by improvements in the job market over the past two years.  Consumer demand remains strong – a key factor in the gross domestic product (GDP) - despite the headwinds created by high levels of inflation.  That’s not to say that we won’t see economic setbacks in the months ahead, but the improving fundamentals should support continued growth over the intermediate to long term.

The HFG managed model portfolios have been significantly adjusted in response to this ever-changing environment.  For example, the mix of growth and value stocks in our three more aggressive models is now reversed from where they were in 2020, now favoring value stocks.  Perhaps the most significant change was the addition of what are referred to as “alternatives” – an investment asset class that is non-correlated to both the stock and bond markets - that we believe will benefit in the current environment.